30 Most Damaging Tackles In Soccer History 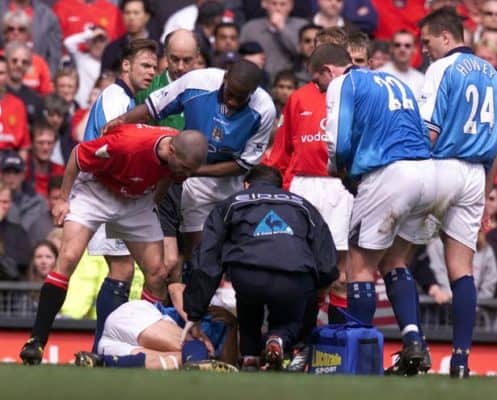 A Good Tackle Can Bring a Crowd to Their Feet Like Scoring a Goal… But When They’re Bad, They Can Be So Dangerous… Check Out the 30 Worst Tackles in Soccer History…

As the old boys will tell you: football is a contact sport. It’s definitely changed over the last twenty years though, with a far lower tolerance of what’s an acceptable challenge and what is not. You used to be able to go through the back of a man, but now you can get booked even if you get the ball.

Today we’re going to take a look at some of the worst tackles in the history of the game. Some of them are brutal leg-breakers. Others are vicious assaults that somehow only managed to land a yellow card – there are a frightening amount of them. All of them are extremely entertaining.

So keep on scrolling to watch and read about the 30 worst tackles in soccer history below.

Let’s start this off with what’s just a proper atrocious tackle. Carlisle United was playing Arsenal in the third round of the FA Cup back in 2001 when this psychotic attempted assault happened. Patrick Viera was one of the best players in the world at the time, dominating the midfield for Arsenal. Carlisle’s Richard Prokas decided to do something about the Frenchman.

He came lunging in with two-footed raised off of the ground. Prokas’s body position actually looks like he’s sitting in a go-kart. Viera was sent sprawling and it turned out that his shin guard had actually been split in half by the Carlisle player’s mindless challenge. Referee Steve Lodge failed to book the player.