If you’ve paid anything resembling attention to sports this summer, you’ve probably noticed that the NBA free agency period has been absolutely insane.

Indeed, more big names than ever have seemingly been available. It’s led to some unreal, massive contracts for superstars and solid role players alike. The deals are so big, in fact, that many players from other professional sports like the NFL have taken notice and begun to believe they’re in the wrong sport.

They could be right about that. Based on what we’ve seen in 2019 NBA free agency, basketball is the place to be for lucrative pro sports contracts. If you aren’t quite sure about that, just check out the monster paydays handed out below.

Here are the 30 biggest contracts of the craziest NBA free agency ever – the one we’ve just watched unfold: 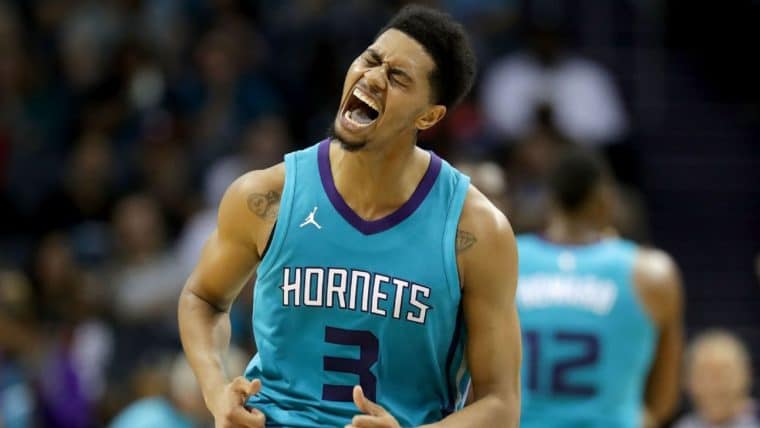 Lamb came over from the Charlotte Hornets as an unrestricted free agent. He’s coming off his best season as a pro after averaging 15.3 points per game and 5.5 rebounds, and it came at just the right time to cash in. 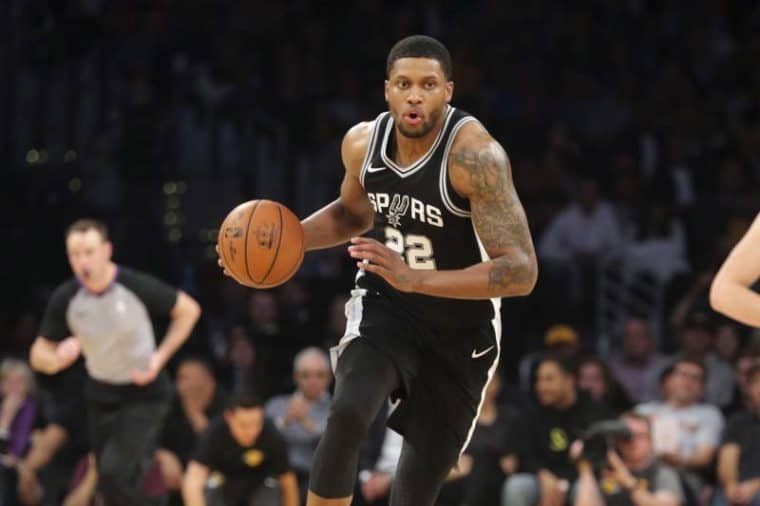 He didn’t exactly have his best season last year, averaging 13.7 points and 6.8 rebounds per game. But he’s a battle-tested vet of 15 seasons, so this was a solid if not spectacular re-signing for San Antonio. 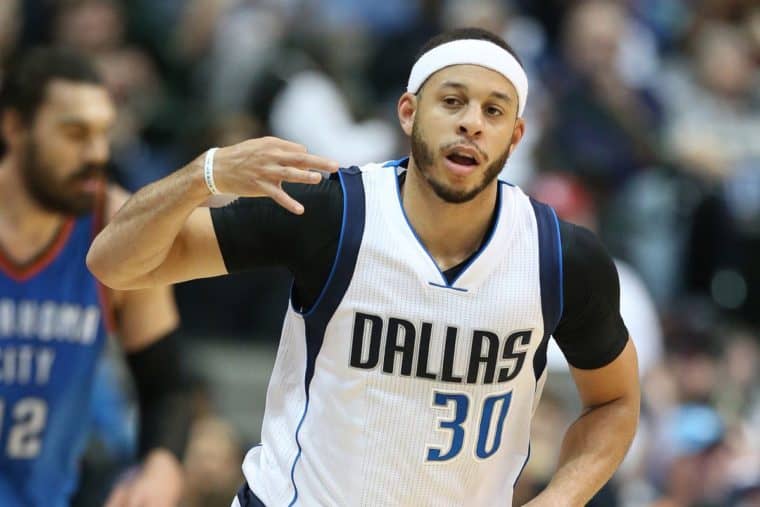 He averaged a measly 7.9 points and 1.6 rebounds per game in his only season with Portland last year. Curry played for Mavericks one season before in 2016-17. For what it’s worth, he did average a career-best 12.8 points per game with Dallas before missing the entire 2017-2018 season due to injury. 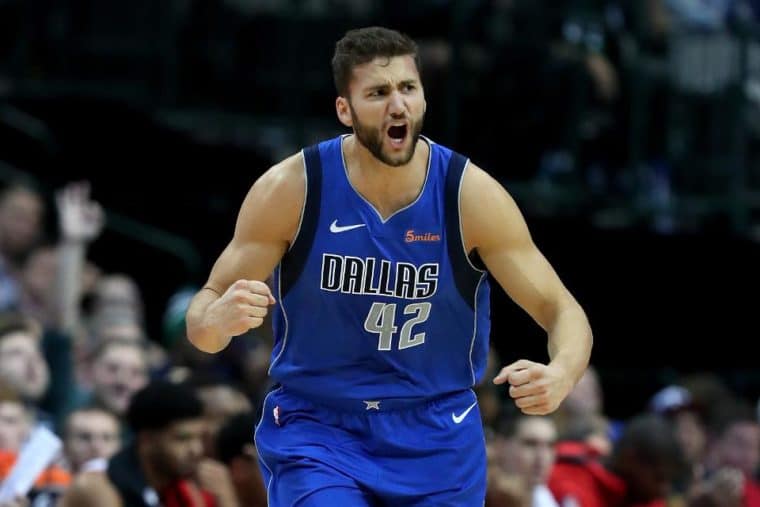 He has not exactly blown the doors off by averaging 6.8 points and 4.6 rebounds per game, but he’s still very young and will be part of Dallas’ core moving forward.

He averaged 6.5 points, 3.4 rebounds, and 3.9 assists per game last season, meaning he cashed in quite nicely at this rate. 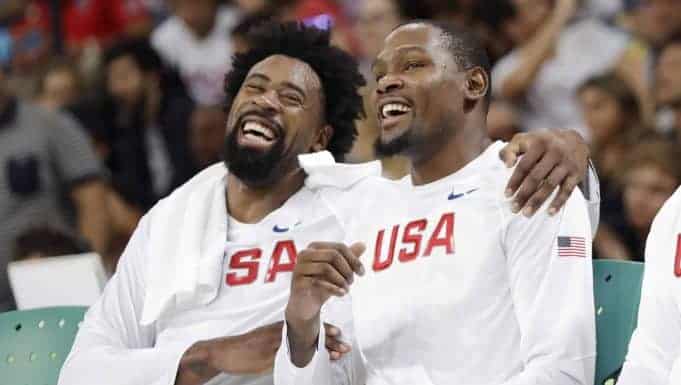 Jordan averaged 10.9 points per game with the Knicks last season, but his true value was in the rebound department, where he averaged 11.4 per game. He’s solid veteran depth for the up-and-coming Nets. 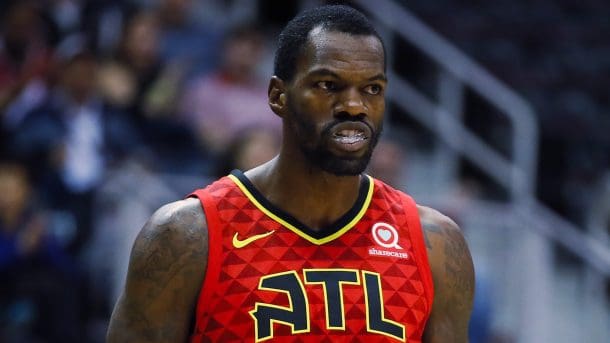 Dedmon averaged a solid 10.8 points and 7.5 rebounds per game last season. The Kings are the sixth team of his NBA career. 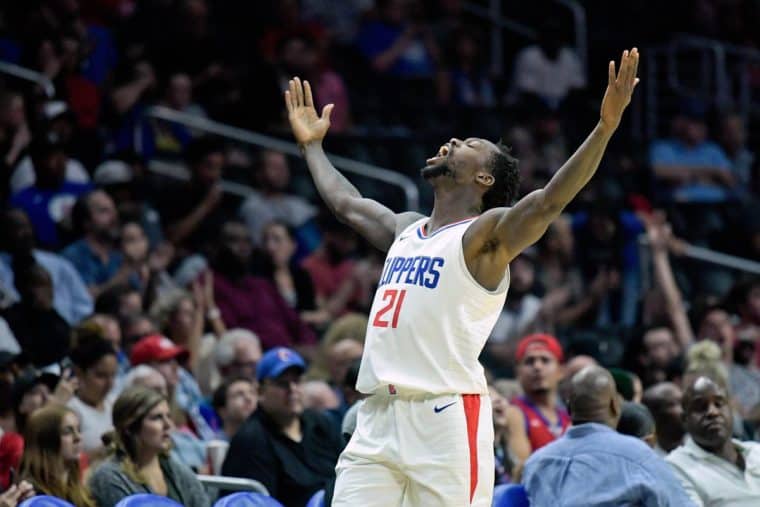 ‘Pat Bev’ averaged 7.6 points and 5.0 rebounds per game this season, but it’s his stifling defense that makes the seven-year vet worth every penny of this deal. 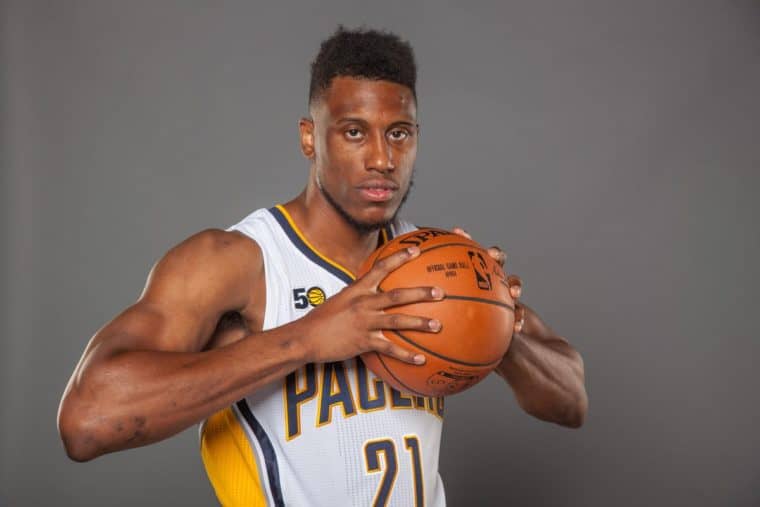 Young averaged 12.6 points and 6.5 rebounds per game last season. He’s a strong veteran presence for the Bulls, who are his fifth team. 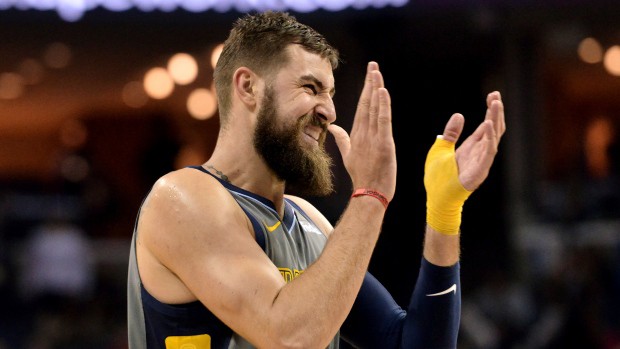 After seven years as a Toronto Raptor, Valaciunas left the team for the Memphis Grizzlies in 2018. He responded with his best-ever year by a wide margin, where he averaged 19.9 points and 10.7 rebounds per game. 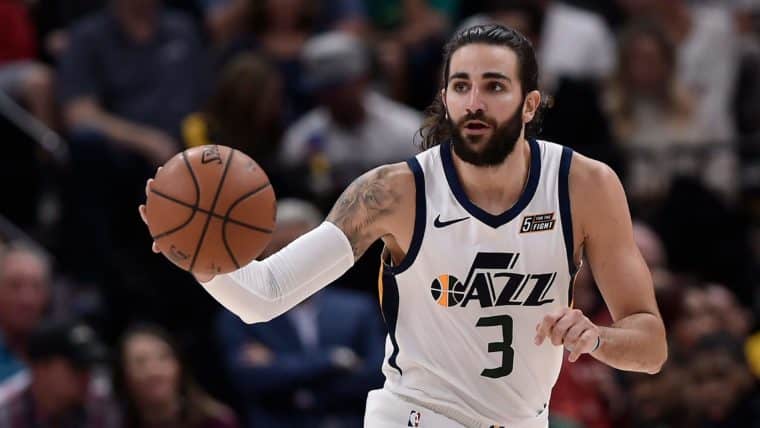 After spending his first six years in Minnesota, Spanish sensation Rubio played for the Utah Jazz the last two seasons. He left Utah as an unrestricted free agent for the lowly Phoenix Suns this summer. 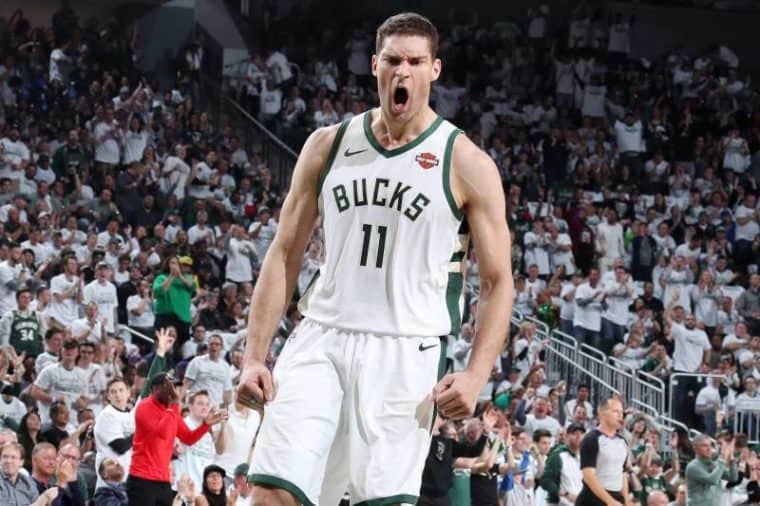 The seven-foot Lopez is now an 11-season veteran somehow. He played a solid role for the upstart Milwaukee Bucks last year, averaging 12.4 points and 2.2 blocks per game. After years of obscurity, Milwaukee nearly made the NBA Finals, falling only to eventual NBA champion Toronto Raptors in the East Conference Finals.

Ross began his career with Toronto then went to Orlando in 2016-2017. He’s played well for them, averaging 15.1 points and 3.5 rebounds per game in 2018-2019. Ross has a pure shooting touch that plays perfectly into today’s three-point-focused NBA climate. In fact, he became the first-ever player to make 200 threes without starting a single game in 2018-2019. 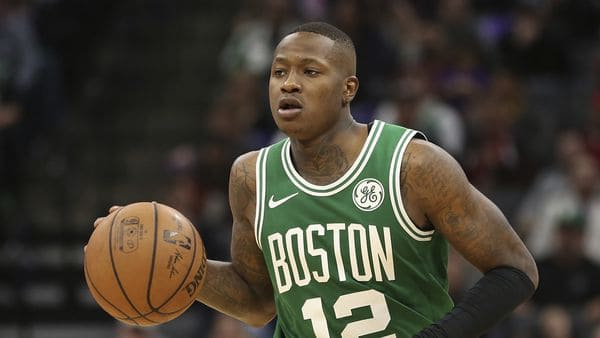 Rozier has played his entire four-year career with the Boston Celtics up until this point. After he averaged 9.0 points, 3.9 rebounds, and 2.9 assists per game in 2018-2019, the Hornets decided to pick him up as a restricted free agent. 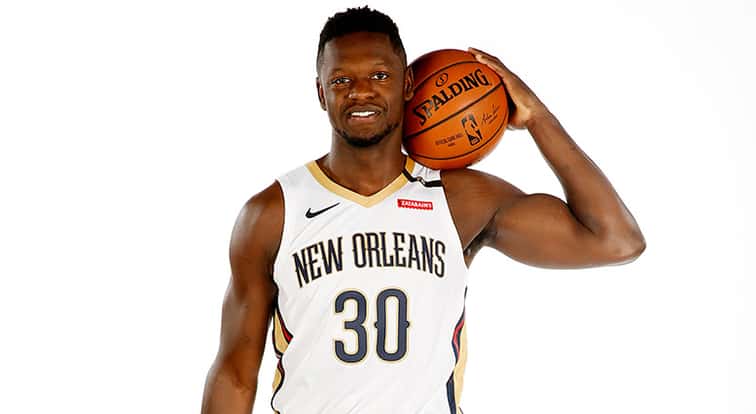 After starting his career with four straight seasons with the Los Angeles Lakers, Randle took his talents to New Orleans in 2018-2019. What followed was his best season by far when he averaged 21.4 points, 8.7 rebounds, and 3.1 assists per game.

While the joke-inducing New York Knicks were expected to land a truly high-profile free agent this offseason, they did not get one of the biggest fish in the vast and open waters. They did, however, nab Randle. Of course, he’s far from a slouch. The Knickerbockers lavished a three-year, $62,100,000 deal on Randle. It will pay him $20,700,000 per season with a 2019-20-cap hit of $18,000,000. The Knicks need him – and a whole lot more – to end their seemingly endless downward trend this year. 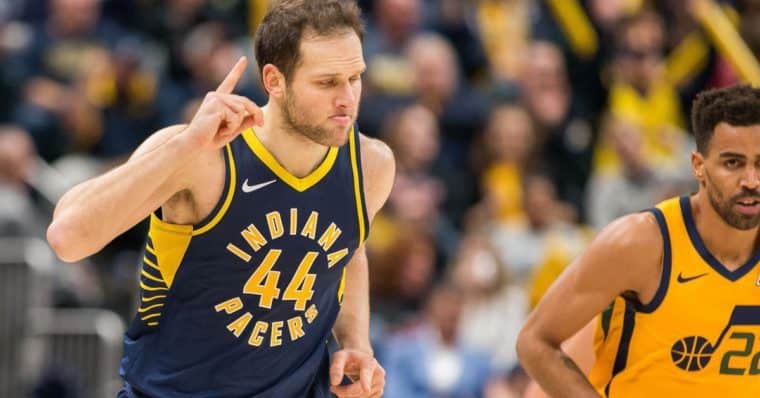 After losing Rocky Rubio, the Jazz will be counting on Bogdanovic to replace his offense and then some. 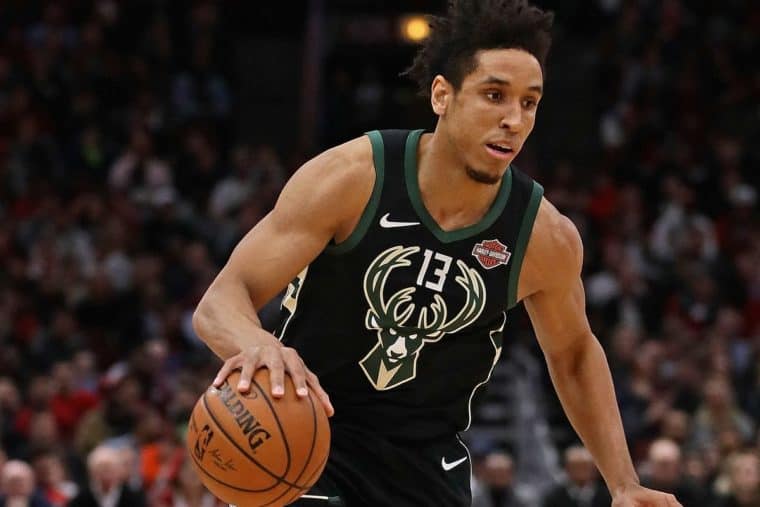 After kicking off his career with three seasons in Milwaukee, Brogdon cashed in on the spending spree of the Indiana Pacers as a restricted free agent. He averaged 15.6 points, 4.5 rebounds, and 3.2 assists per game in the Bucks’ unreal 2018-19 year, including an amazing .928 free throw shooting percentage. 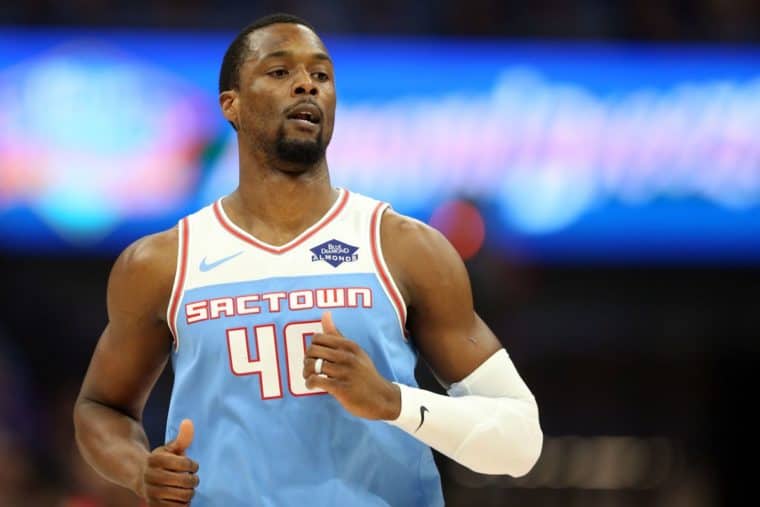 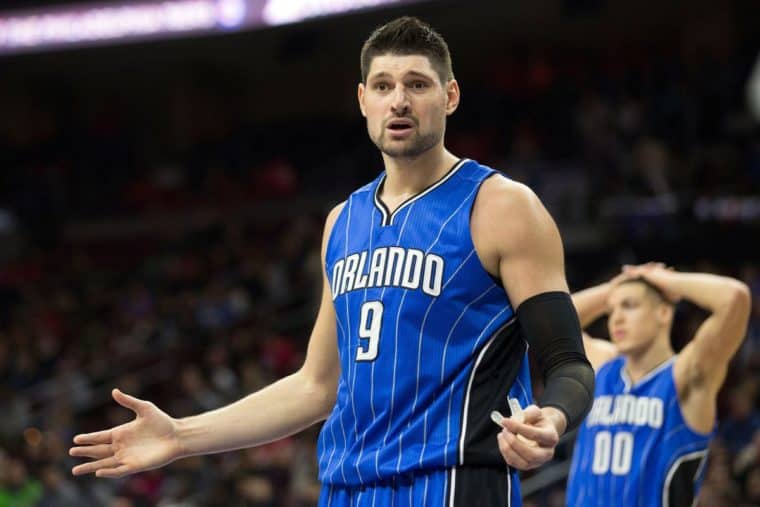 Seven-foot Montenegrin Vuceviv has played all but one season of his eight-year career with the Orlando Magic. His latest effort was by far his best, where he averaged 20.8 points, 12.0 rebounds, and 3.8 assists per game in 2018-2019. 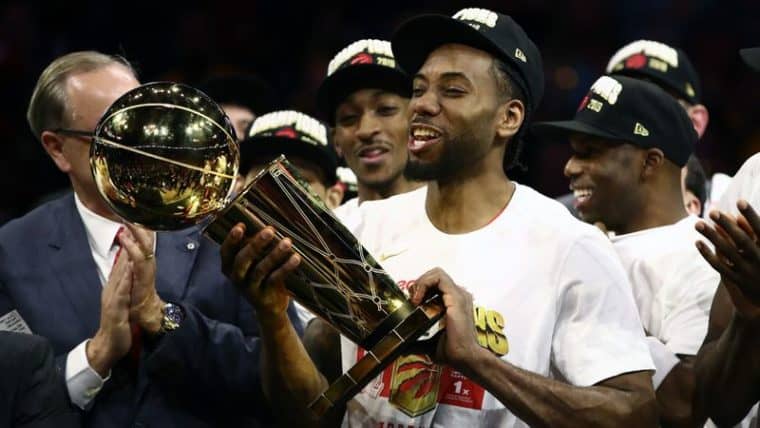 Perhaps the hottest name on this list overall, Leonard lead the Toronto Raptors to an unlikely NBA Championship after playing only 17 games for the San Antonio Spurs in 2017-18. He was an absolute beast who scored 26.6 points, 7.3 rebounds, and 3.3 assists per game. Then he averaged 30.5 points, 9.1 boards, and 3.9 assists in the playoffs. 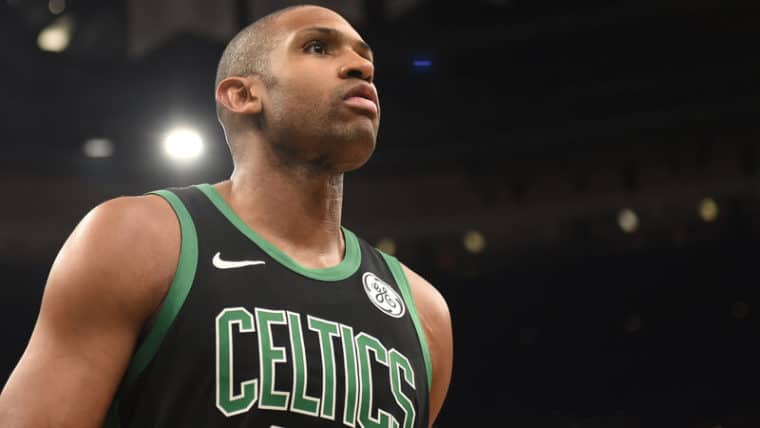 After nine seasons in Atlanta to kick off his career, Horford played the last three in Boston. Last year, he averaged 14.1 points, 8.4 boards, and 3.2 assists per game.

The 76ers are an up-and-coming force in the East, so adding the veteran Horford to their young core of Joel Embiid, Tobias Harris, and Ben Simmons was a savvy move if a costly one. 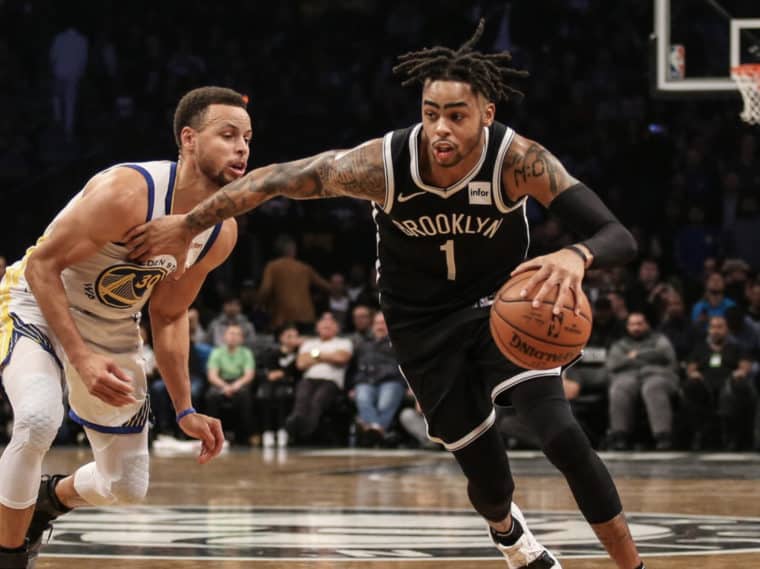 The supposedly fading juggernaut Golden State Warriors lost one of the biggest names yet to come on this list, so they re-upped by adding the young, dangerous Russell to their team in free agency. The previous Brooklyn Net and Los Angeles Laker signed a four-year $117,325,500 deal averaging $29,331,375 a year as a restricted free agent. It has a cap hit of $27,285,000 this year.

The 23-year-old Russell averaged 21.1 points, 3.9 rebounds, and 7.0 assists this year. Golden State made a big and much-needed move by adding this future star to their roster in the 2019 free agency frenzy. 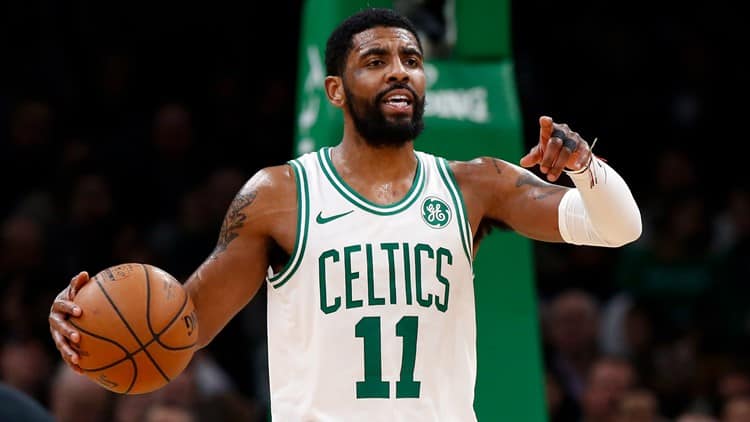 An infamous superstar who helped Lebron James shock the Golden State Warriors in the NBA Finals, Irving has nonetheless gained the reputation of being unhappy wherever he goes. 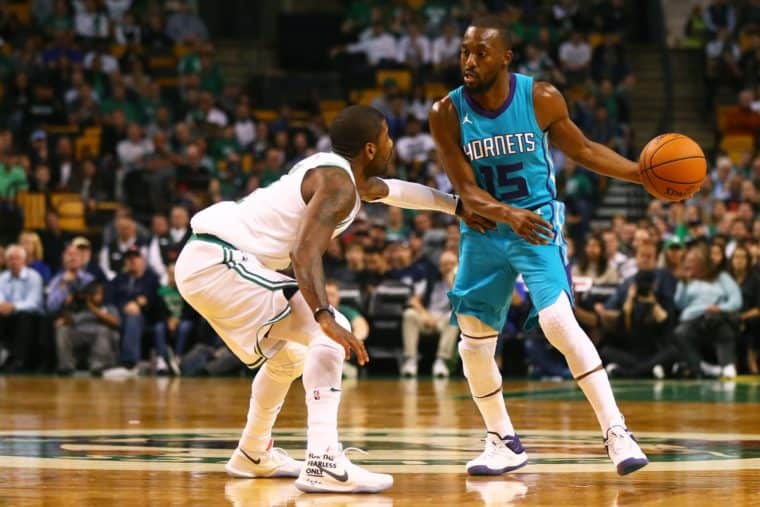 Walker spent his first eight seasons in Charlotte. He was a consistent force there, averaging more than 20 points a game for four straight seasons. Last year was his finest when he racked up 25.6 points, 4.4 rebounds, and 5.9 assists per game.

The Eastern Conference is shaping up to be a tough one this year, so Walker has his work cut out for him in leading the Celts to a top spot there. He got paid huge and should be up to the challenge. 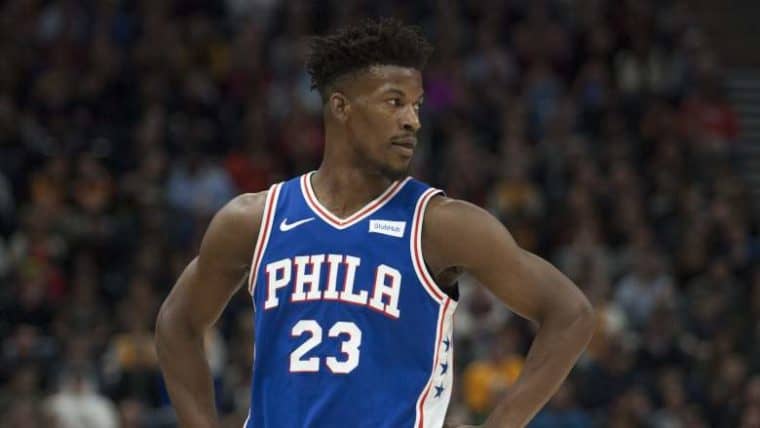 Butler averaged more than 20 points a game himself for the Bulls and Timberwolves from 2014-2019. He was then traded to Philly in early 2019. He averaged a little less at 18.2 points for the 76ers, but still got paid big to go to South Beach. 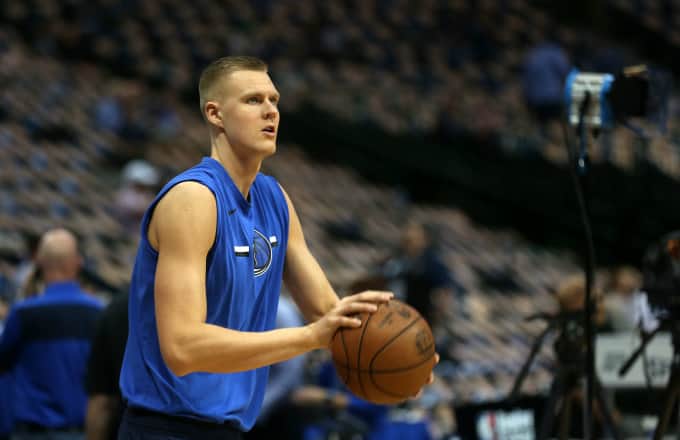 Porzingis didn’t play at all during the 2018-19 season after tearing his ACL. But after the Mavs traded the New York Knicks for him, it was time to extend his contract and lock him up. 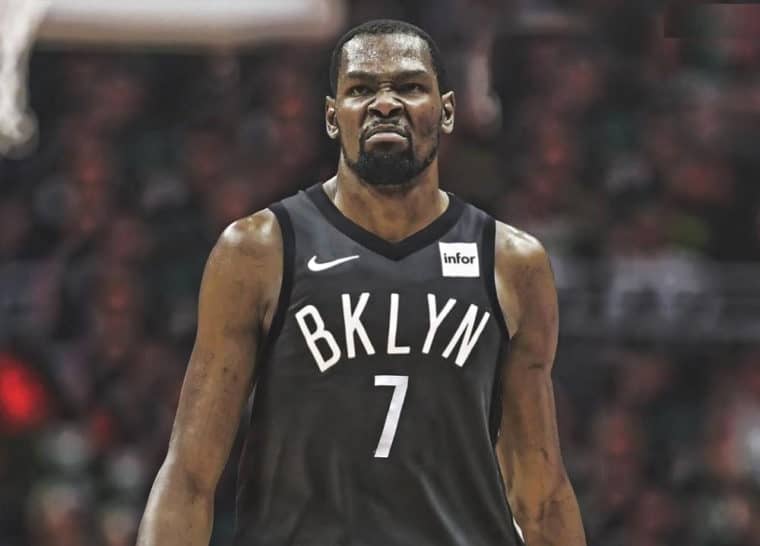 Now we’re getting up into the true big guns of the 2019 NBA free agency frenzy. Durant infamously tore his Achilles tendon while playing for the Golden State Warriors in the 2019 NBA Finals. His team lost, adding insult to injury, but Durant also won two rings with the Warriors in 2017 and 2018. 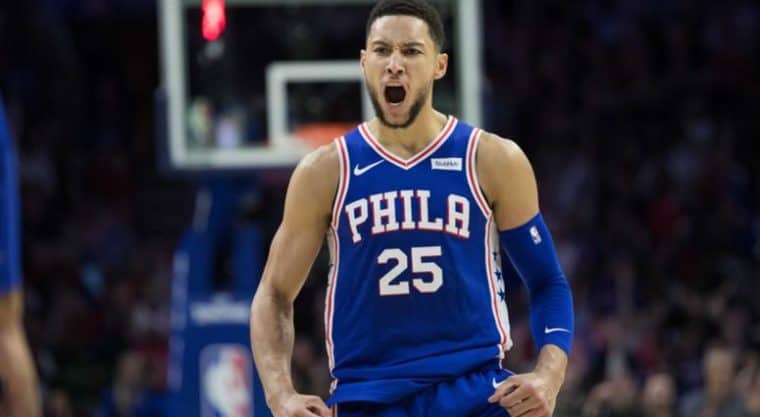 He’ll remain with Joel Embiid, Tobias Harris, and the newly acquired Al Horford as Philadelphia looks to make a big push towards the Eastern Conference Championship. 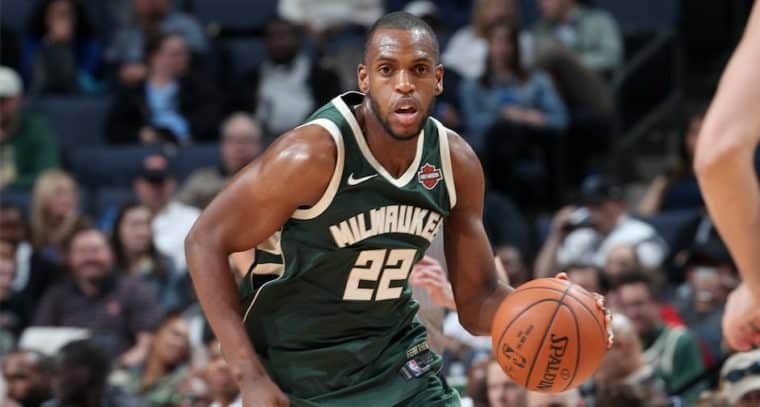 After playing one year in Detroit, Middleton has played the last six with the Bucks. He had one of his finest seasons last year, averaging 18.3 points, 6.0 rebounds, and 4.3 assists a game in 2018-19. The Bucks obviously made the Eastern Conference Finals as well, so they chose to pay Middleton in order to keep their core intact. 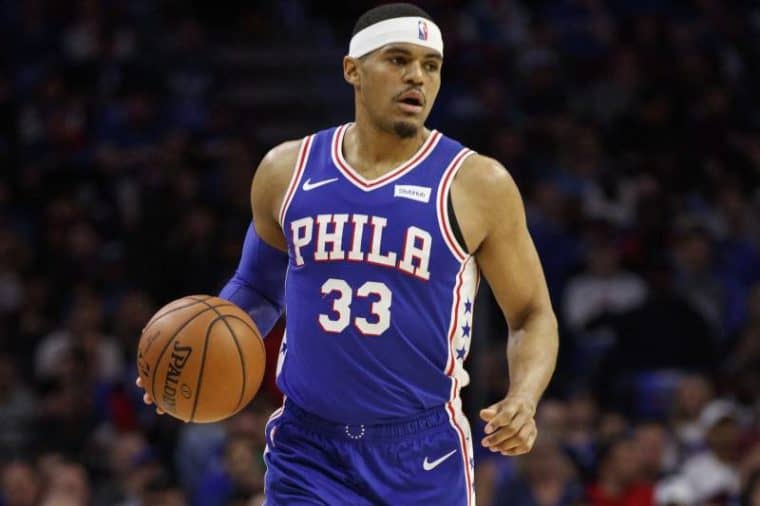 Philadelphia obviously saw him as an integral piece as the highest-priced prize of their free agent spending spree. The 76ers locked him up to a five-year, 180,000,000 contract averaging $36,000,000 a year with a $31,034,483 cap hit. Philly is gambling big that this core of Joel Embiid, Harris, Ben Simmons, and Al Horford gets them to the Finals. It had better at this price tag. 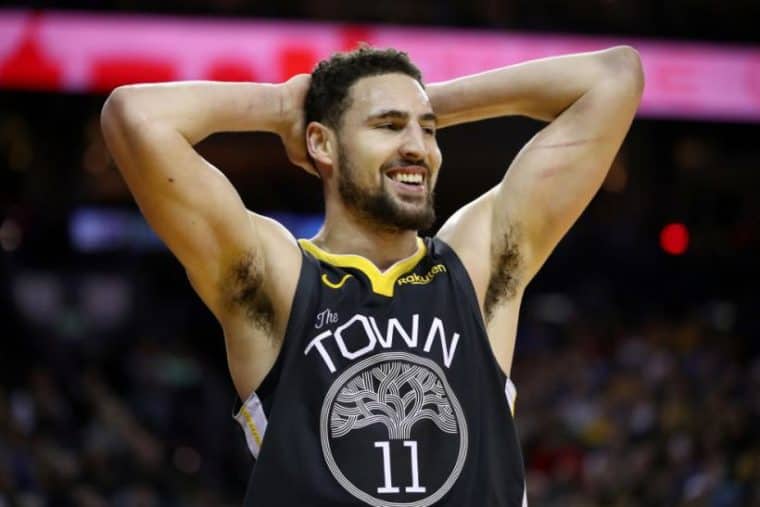 Finally, we arrive at the biggest contract of the absolutely insane 2019 NBA free agency season. Thompson needs no introduction as a member of Golden State’s infamous ‘Splash Brothers’ with Steph Curry. He averaged 21.5 points, 3.8 rebounds, and 2.4 assists last year as the Warriors made the NBA Finals again.

Thompson has quite a ways to go towards his recovery. But overall, he’s still one of the best pure shooters in the league today. If Golden State wanted to keep their core intact, they needed to make this huge deal, and they did. Thus, Thompson signed the biggest deal of the NBA’s craziest free agency period of all-time.