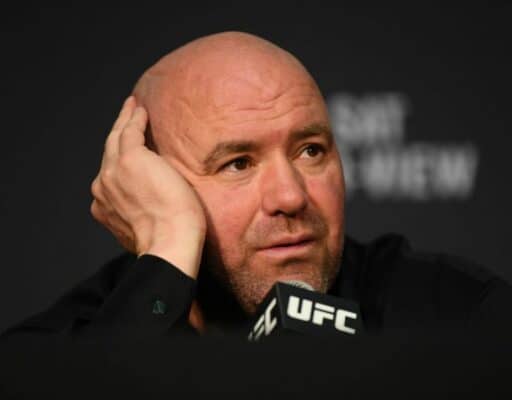 Foul-mouthed and straightforward, some find UFC President Dana White a breath of fresh air in an overly politicized sports world. However, others think he is simply obnoxious, pig-headed, and selfish. As polarizing a figure as he is, he’s an incredibly powerful figure and has the ear of US President Donald Trump.

His stance towards the current health crisis is very controversial. Most major sports leagues have shut down for the time being. But the UFC recently held three events in one week in Jacksonville, Florida. It’s become apparent that White refuses to back down and insists the show will go on despite rising deaths across the United States. He’s even found his own “Fight Island” to ensure the show goes on.

You may or may not agree with his response to the situation. But you have to admit it’s been incredibly entertaining. So today, we’re going to take a look at 20 of White’s most noteworthy quotes during this remarkable period.

White really doesn’t like the media, at least partly because he doesn’t like being criticized. After facing criticism for defying social orders and common sense, he went on the assault. He labeled the MMA media ‘wimps’ and basically tore them apart. Needless to say, this didn’t endear him to said journalists like ESPN’s Ariel Helwani.

“Think about this: Go online and look at some of these people – and this isn’t a knock, this is just a fact: The weakest, wimpiest people on earth cover the biggest, baddest sport on earth,” White said. “What do you expect them to say? What do you think they’re gonna say?”