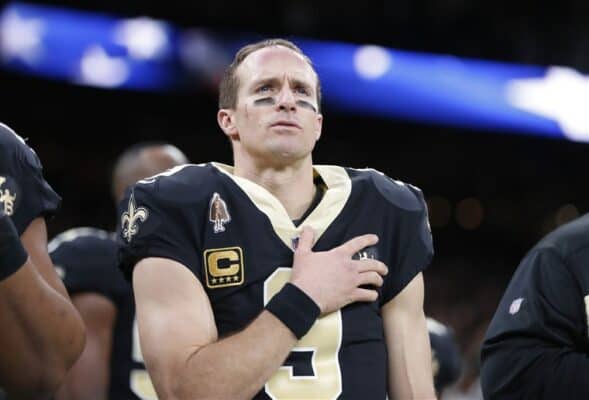 One of the greatest NFL quarterbacks of all-time, New Orleans Saints star Drew Brees has found himself embroiled in controversy. Brees recently told Yahoo Finance why he doesn’t agree with taking a knee during the national anthem. He feels that it’s disrespectful to the military and unpatriotic.

As a result, he’s suffered a massive backlash from other athletes across the world of sports. Protestors in New Orleans have also responded furiously. They chanted “F**k Drew Brees” with several posting videos and pictures as they burnt his jersey. Since his earlier comments, he has posted a lengthy public apology.

For the sake of balance, it’s worth mentioning that Brees has donated over $5 million to Hurricane Katrina victims as well as actually taking a knee in solidarity with his teammates at games before. Given the current situation of unrest in America, his comments are still divisive. Let’s take a look at how 25 prominent athletes have reacted to the situation, both in anger and in support.

The first twins to appear in and win a Super Bowl together, Devin and Jason McCourty are standouts for a number of reasons. They also share the same Twitter account where they aren’t afraid of making their personal views known. There, the McCourties came down hard on Brees.

“This is a disgrace! To speak about your grandfathers as if there weren’t black men fighting next to them. Those men later returned to a country that hated them. Don’t avoid the issue and try to make it about a flag or the military. Fight like your grandfathers for what’s right!”