26 Most Notorious Lawbreakers In NFL History

26 Most Notorious Lawbreakers In NFL History

Robbins suffers from bipolar depression and went missing the day before the Oakland Raiders’ appearance in Super Bowl XXXVII. He supposedly went on an alcohol-fueled rampage in Mexico. His wife later revealed he thought the team had won the Super Bowl and he was celebrating their victory. Robbins did not even recognize his then-coach Bill Callahan when he was brought back to the team.

Robbins was then kicked out of football for taking steroids during the BALCO scandal. Months later he assaulted policemen in Miami Beach and was shot three times. He was charged with attempted murder. He pleaded guilty to five charges and was in jail and/or rehabilitation for the better part of a decade. Robbins was later caught with crack cocaine and sentenced to five years in prison for violating his probation. Finally, in 2016 he allegedly punched a woman and her daughter in Florida, earning him two felony battery charges. Robbins was sent to a mental hospital. 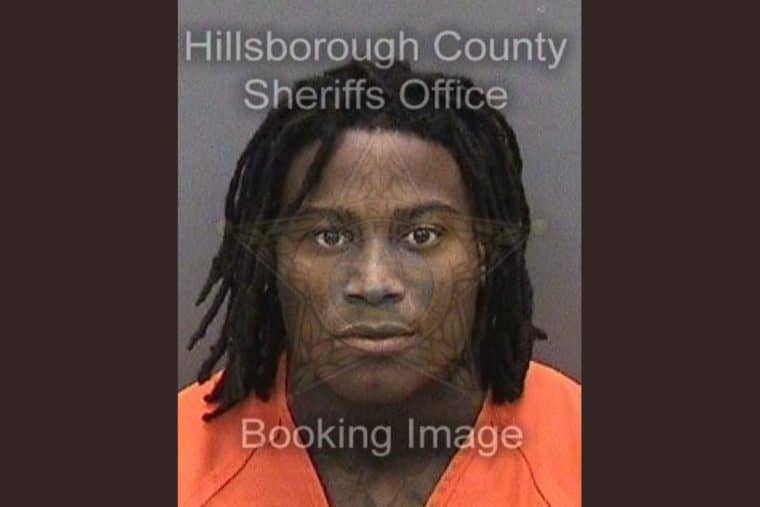 A current iteration of the NFL’s continuing brush with the law, Foster came into the league amid controversy. He failed a drug test at the NFL scouting combine, and it was later found he gave a diluted sample. But the 49ers drafted him in the first round anyhow and he became a top-level NFL player right away.

However, it didn’t last. Foster was arrested for marijuana possession in January 2018 before he was arrested for suspicion of domestic violence, threats, and assault weapon possession a month later. His girlfriend at the time, Elissa Ennis, said, “Foster did not strike her, injure her or threaten her,” and that she made the domestic violence story up after he threatened to call off their courtship. Her injuries were supposedly from a fight with another woman.

That November he was arrested yet again on probable cause misdemeanor domestic violence charges. The 49ers released him the following day but Washington picked him up off of waivers. 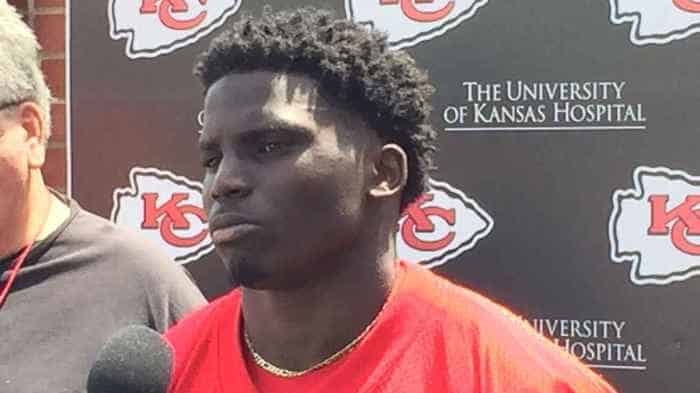 Like Foster before him on our list, Hill came into the NFL with some questionable baggage. He was kicked off the Oklahoma State football team in 2014 for some disturbing domestic violence allegations where he was arrested for allegedly choking, sitting on, and hitting his girlfriend, Crystal Espinal, who was pregnant with their son, in the stomach. He transferred to West Alabama and finished his collegiate career. It was not thought Hill would be drafted in the 2016 draft but Kansas City took a chance in the fifth round.

The speedster promptly became one of the most dangerous all-purpose threats by 2017. By 2018, he was arguably the most threatening wide receiver in the NFL. However, Hill was soon investigated for an alleged domestic violence incident where his three-year-old son with Espinal suffered a broken arm. Their son was placed into protective custody by the Kansas Department of Children and Families and Hill was suspended from all Chiefs team activities. Audio of Espinal discussing their son being afraid to him came out, and Hill could be saying to Espinal, “You should be afraid of me too.” The criminal case against him was reopened, On June 7, prosecutors announced the case against Hill was inactive in June. Investigations showed his son’s arm was broken in an accident where he was bracing during a fall. Hill met with NFL investigators last week and supposedly supplied evidence that was heavily in his favor, but he will most likely be suspended for multiple games. 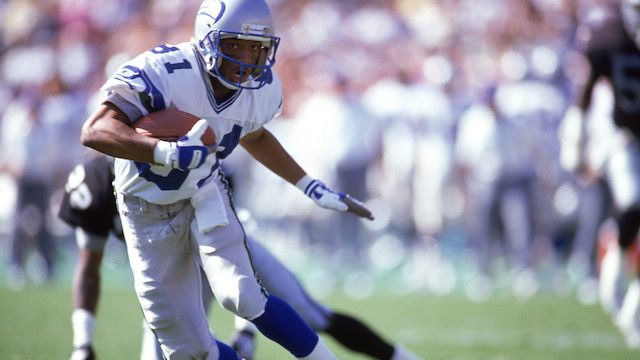 Former Seattle Seahawks wideout Kane allegedly grabbed his wife’s hair, smashed her head on the kitchen floor, and stabbed her in the neck at his mother’s house in Quebec. His wife, Tammara Shaikh, died in the care of a church counselor from who was attempting to help Shaikh get Kane into rehab after they had recently broken up.

He was charged with second-degree murder but claimed he was depressed and his charge was lessened. It was debated if he actually attempted to murder his wife on purpose. He pleaded guilty to manslaughter and was sentenced to 18 years in jail. Kane was also required to pay $590,000 to Shaikh’s family by a Quebec court.

Now we’re getting up into the true nitty gritty of notorious NFL criminals. All-time great linebacker Lewis was involved in an altercation following a Super Bowl XXXIV party on January 31, 2000, where two men, Jacinth Baker and Richard Lollar, were murdered by stabbing. Lewis and two of his friends were arrested on first-degree murder charges. The suit Lewis was wearing that night has never been found but was allegedly dumped into a garbage can outside of a fast food restaurant. Baker’s blood was inside Lewis’ limousine.

But Lewis soon agreed to a plea deal where he gave testimony against his two friends, Reginald Oakley and Joseph Sweeting, who were with him that night, and a guilty plea to obstruction of justice charges. Lewis was dealt 12 months probation and Oakley and Sweeting were acquitted of the charges later that year. Lewis became a Super Bowl MVP the following season. 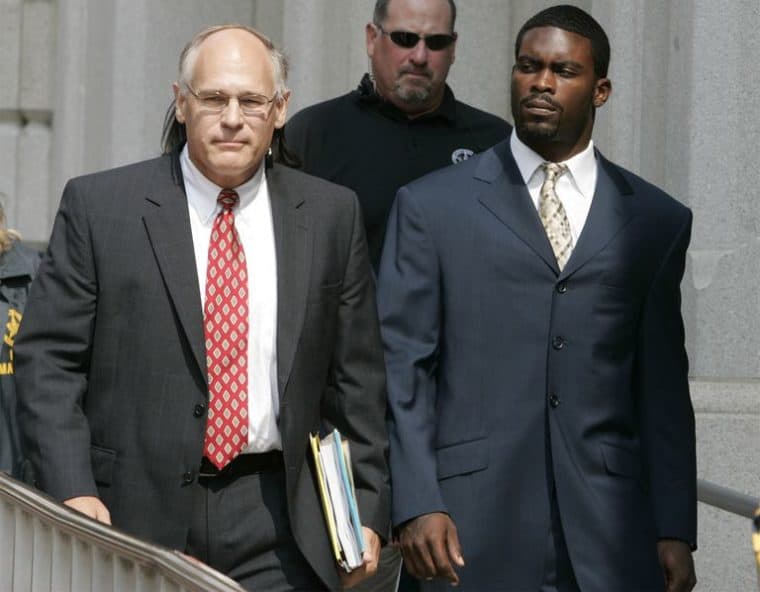 We all know the disgusting story of Michael Vick. The unreal-athletic Atlanta Falcons quarterback pleaded guilty to federal charges in the Bad Newz Kennels dog fighting investigation. He had financed a gambling ring that did horrific things to pit bulls. The NFL suspended Vick indefinitely and the Falcons recovered a portion of his signing bonus totaling $19.97 after an arbitration hearing. They did not release Vick immediately but did so in June 2009.

As for the dog fighting ring, Vick admitted to financing several dog fights in Virginia, Maryland, North Carolina, and South Carolina. He also stated he shared the profits from the dog fights and that his accomplices killed the unfortunate dogs who did not perform well. Vick was sentenced to 23 months in federal prison. He returned to the NFL with the Philadelphia Eagles after he was released in 2009, but was required to put $1 million into an escrow account to pay for the care of the dogs he had harmed that were still alive. 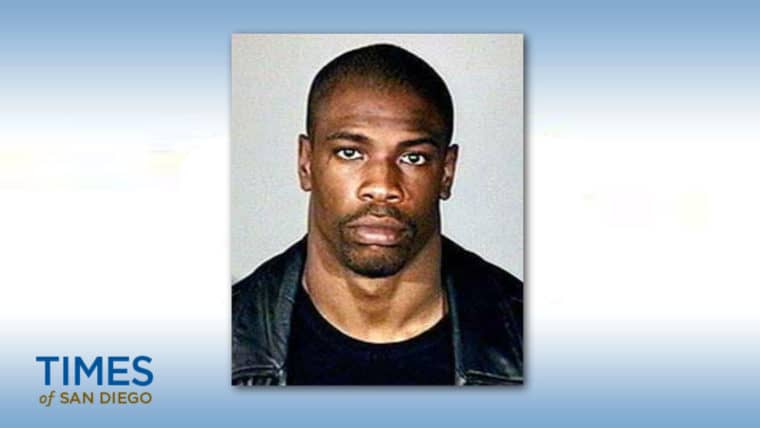 Phillips made our list of biggest NFL draft busts, and he’s also one of the most notorious criminals in NFL lore. It all began during his college days with the Nebraska Cornhuskers where he drug an ex-girlfriend down the stairs of an apartment building where she was supposedly sleeping with current Nebraska head coach Scott Frost.

But things got much worse for Phillips after his playing career was over. He was arrested in 2005 for hitting three teenagers with his car after a pickup football game. He was also wanted for three other alleged assaults in California at the time. He was convicted of seven out of his 10 total counts and sentenced to 10 years in prison. While serving out that term, he was convicted of another assault on ex-girlfriend Amaliya Weisle. He was again found guilty on seven counts, including assault with great bodily injury, false imprisonment, making a criminal threat, and auto theft. Phillips was sentenced to another 25 years in prison for the charges.

He was then charged with the murder of his cellmate Damion Soward in April 2015 while in prison. While awaiting trial for first-degree murder, Phillips hung himself in his cell and was found unresponsive. A sad ending to a sad life of one of Nebraska’s most talented football players. 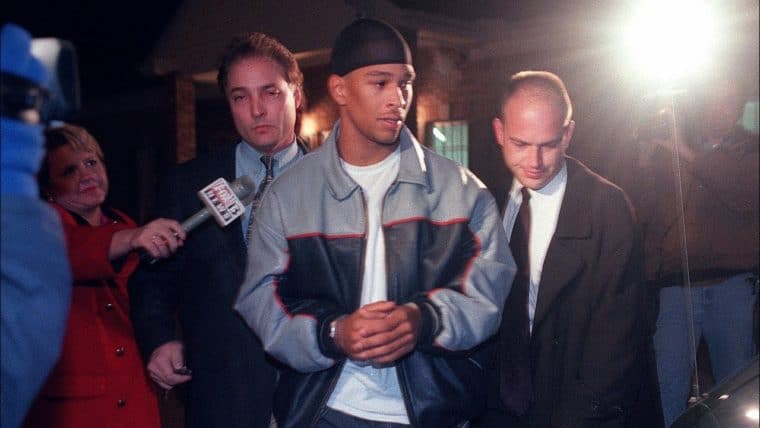 Carruth had his friend Van Brett Watkins Sr. shoot his then-girlfriend Cherica Adams four times in a drive-by in 1999. Adams survived long enough to call 911 and told police Carruth had stopped his vehicle in front of her so she could not leave. Another vehicle drove up and someone shot her.

She was eight months pregnant with Carruth’s baby at the time. The child was delivered via emergency C-section but suffered brain damage. Adams died. Carruth fled after she died but was caught hiding in the trunk of a car outside a motel. Carruth was found guilty of conspiracy to commit murder, shooting into an occupied vehicle, and using an instrument to destroy an unborn child and sentenced to 18 to 24 years in prison. The Carolina Panthers released him immediately and the NFL suspended him indefinitely. 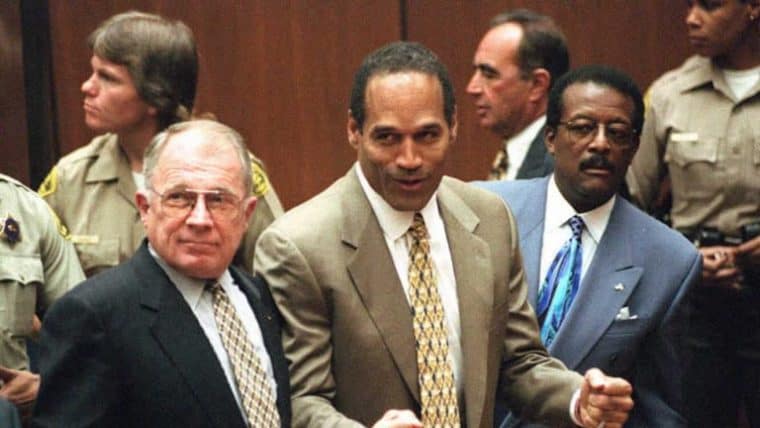 You know the story. Legendary NFL running back-turned-actor OJ Simpson was arrested for the murder of his wife Nicole Brown Simpson and her friend Ronald Goldman. He led police on a nationally televised chase in the famous white Bronco that pre-empted the NBA Finals. It seemed that Simpson was clearly guilty of the grisly killing, yet his infamous lawyer Johnny Cochrane got him off thanks in part to his infamous “if it does not fit, you must acquit” defense. The case was arguably the most high-profile murder case in US history.

Brown and Goldman’s families sued him after the case. A $33.5 million judgment was ruled in favor of the families. Simpson later got into more legal trouble and was arrested in Las Vegas on nine felonies including robbery and kidnapping. Simpson was convicted and sentenced to 33 years in prison, of which he served nine years. He was released on October 1, 2017, and is now out.

However, for his crimes – convicted or not – Simpson is undoubtedly the most notorious criminal in NFL history, and it’s not really even all that close.