30 “Can Do Better” Uniforms In Soccer 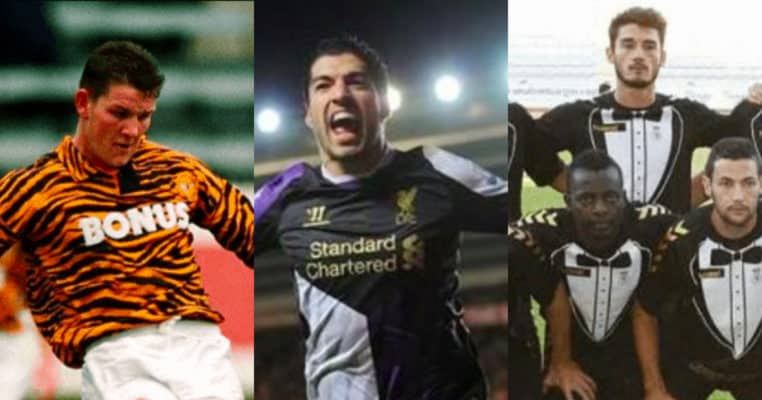 Who Doesn’t Love a Good Football Shirt? And is There Anything Worse Than When Your Clubs Serves Up a Mess of a Kit? Check Out the Worst Ever Below…

Football kits are some of the most lucrative and important sources of incomes for professional clubs. The big teams will get paid millions upon millions by the likes of Nike, Adidas, New Balance and Puma to make jerseys that will be gobbled up by fans.

It doesn’t matter how expensive they are, fans will still buy them. These days for the big European teams you get a new home kit, three away kits and two goalkeeper kits every year. It shouldn’t be surprising then that some of them are absolutely awful.

When they’re good they’re very good, but when they’re bad you wouldn’t be seen dead in them. Check out the 30 worst kits in football history, from all across the world.

This Recreativo de Huelva shirt had fans protesting and we don’t blame them. Traditionally the Spanish side wears blue and white and tends to go for red when it comes to their away strips. They spent almost two decades in La Liga before relegation almost saw them go extinct. Well, this disaster of a shirt didn’t help matters in 2012.

Polka dots. Polka dots do not belong on a football shirt. A bikini sure, we’re cool with that. But not a football shirt. Instead of looking like professional players, the Recreativo squad looked like they were cosplaying Disney characters. Shambolic.  Relegation is too good for them.