The Barcelona centre-back was one part of France’s World Cup-winning defence. A risk-taker, he’ll leave challenges to the very last second and throws his body in the way of shots like nobody’s business. One of his most useful attributes is his ability to feed the ball between the lines, setting up attacks from the back – a key part of the Barcelona way.

There is so much more to come from Umtiti which is frightening when you think about how much he has already achieved. As well as the World Cup, he’s already won two La Ligas and two Copa Del Reys. The Champion’s League is surely next on his radar. It’s been a while since Barcelona have got their hands on it.

Is there a more underrated centre-back in the world right now than Joel Matip? His defensive partner gets so much more credit, but Matip is the perfect foil for Virgil Van Dijk. The Cameroonian defender is one of the most consistent defenders in the world. Calm and composed on the ball, he played a key part in Liverpool’s Champion’s League-winning campaign in 2018/19.

One of Matip’s key attributes is his ability to find a pass. His cross-field balls have helped to set up many attacks. The big man isn’t as charismatic as Virgil Van Dijk, but he offers a sense of balance in Liverpool’s defence. At the age of 28, he’s hit his prime at the right time.

A true warrior of a centre back, Diego Godin was at the battling heart of everything Atletico Madrid did for nine years. Now with Inter Milan, Godin is a proper old-fashioned centre-half. Tenacious in the tackle and a charismatic leader, he’s also a legend with his native Uruguay. The man embodies steel and sheer grit.

A Barcelona legend, Gerard Pique has one of the most impressive trophy cabinets in the history of the game. The Catalan is a modern defender who has great reading of the game and has good technique and passing. Tall, elegant and refined, he’s everything you’d expect from a centre back at one of the greatest clubs in the world.

Pique has won La Liga a ridiculous eight times with Barcelona. When he first established himself at the club, he was the B side alongside Carlos Puyol. But for the past number of years, Pique has proven himself to be one of the very best and for such a long period of time too. He’s also a winner off the pitch, marrying the Colombian pop star Shakira.

Since 2012, Jan Verthongen has been one of Tottenham Hotspurs’ key operators. The Belgian is a natural left-footer – one of the most valuable assets in the game. He’s been a consistent performer at White Hart Lane, twice being made a member of the PFL Team of the Year and the Player of the Year award at Spurs in 2018.

Verthongen is a natural leader and has captained Ajax, Spurs and Belgium at various stages. He’s also won 112 caps for his country, which just goes to show how good he has been for so long. Able to operate as a left-back when necessary, he’s a massive favourite amongst the Spurs faithful.

How has nobody activated his release clause yet? Belgian defender Toby Alderweirald has been a mainstay at the heart of Tottenham Hotspurs’ defence since 2015. Now 30-years-old, he’s been one of the most consistent players in the Premier League over that period and a key reason behind Spurs establishing themselves in the top-four of the division.

A La Liga winner with Atletico Madrid, Alderweirald is a calm, composed defender who is every bit the modern idea of what a centre back should be. He’s helped Spurs to the best defensive records in their history and is linked away every season. The clock is ticking on a move to one of the giants of the European game, but there’s no doubt that he’s on an elite level. 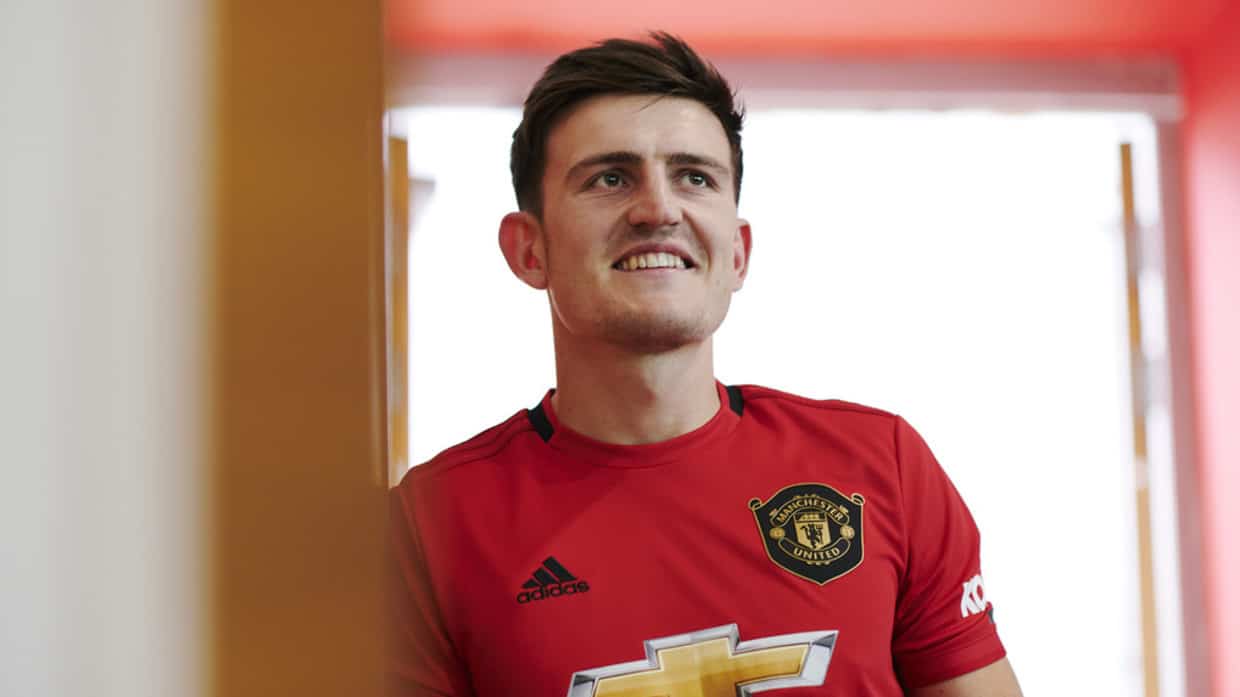 The most expensive centre-back in the world, Harry McGuire is one of the first names on Gareth Southgate’s England team sheet. The Manchester United man moved from Leicester City in the summer of 2019 for a world record £75 million. The Red Devils hope that he’ll have the same influence for them as Virgil Van Dijk did for their arch-rivals, Liverpool.

Is it too expensive? Well, if he helps get them to where they want to be then no, it will be money well spent. Tall and strong, McGuire is also really effective in possession. In the modern game where managers want their defenders playing out from the back, ‘Slabhead’ is the perfect option. Even if he looks like one of Draco Malfoy’s henchmen.

The other half of Real Madrid’s centre-back pairing, Raphael Varane might not be as notorious as Sergio Ramos, but he’s equally important at the Bernebeu. Quietly efficient, the French World Cup winner took time to establish himself as a first-choice starter, but now he’s an invaluable member of the team, winning two La Ligas and four Champion’s Leagues.

Varane is technically first-class. Although he’s less aggressive and charismatic than Sergio Ramos, he’s arguably technically more proficient. Physically imposing and possessing blistering speed, he was a key cog in France’s World Cup-winning campaign. He’s only the fourth player to win a World Cup and Champion’s League in the same year.

Now a Juventus icon, Giorgio Chiellini looks the part of the intimidating centre-half. With his imposing frame and hatchet face, he cuts a fearful figure. One of the main reasons behind Juventus’s domestic dominance has been their defensive strength and Chiellini embodies that, winning 8 Serie A titles with The Old Lady.

Chiellini is an aggressive, hard-tackling defender who also has a great ability to read the game. He’s fantastic in the air, scoring a number of goals from headers. A natural left-footer, he’s incredible at man-marking attackers, nullifying them out of the game. Now 35, let’s hope he recovers from a serious ligament injury.

One of the most iconic players of this Real Madrid generation, Sergio Ramos has an incredibly full trophy cabinet. Supremely talented and frequently controversial, he’s been a stalwart at the heart of Los Blanco’s defence for the past 15 seasons. Aggressive and charismatic, the man is a natural leader and a major part in Madrid’s three-in-a-row Champion’s League wins.

He’s also a master of the dark arts – most notably when playing alongside his former defensive partner Pepe. One of his most infamous moments was apparently deliberately injuring Mohammad Salah in the 2017/18 Champion’s League Final. Ramos is the most sent-off player in La Liga and Spanish national team history. He’s also the most carded in the history of the division and the Champion’s League.

Only time will tell, but Napoli just might have the best central defensive pairing in Europe right now. They’ve signed Kostas Manolas from Roma, after five successful seasons with I Giallarossi. The Greek international might not have the trophies to prove it, but he’s been one of the most consistent defenders on the continent over that period.

Manolas may provide perfect balance alongside Kalidou Koulibaly. While he’s less physical than his counterpart, he’s got superb pace, allowing him to keep up with the fastest attackers. Combining the virtues of an old-fashioned sweeper with the modern need to read the game and play out from the back, Manolas is a sublime defender.

Juventus might have as strong a grip on Serie A as ever, but if there’s one thing that title contenders Napoli can lay claim to is that they have the best centre back in Italy’s top division. Kalidou Koulibaly is a force of nature. The 28-year-old Senegal defender has been with Napoli for five years now and he’s a firm fan-favourite in one of the most football-mad regions of the country.

Nicknamed ‘The Wall’ by Napoli fans, Koulibaly is an aggressive, physical player with ridiculous power and strength. He’s also technically excellent. Perennially linked to the biggest teams on the continent, Koulibaly seems happy to remain an icon with Gli Azzuri, who he has helped to a Superoppa Italia. He’s even been made an honorary citizen of Naples.

It is extraordinary that Aymeric Laporte has never been capped by France. Manchester City’s best defender might not have the same charisma or fanatic fanbase as Virgil Van Dijk, but he’s of equal importance to his side. A left-sided centre half, Laporte is remarkably composed on the ball and calm in possession.

The Frenchman is a powerful presence, able to carry the ball forward from the back. He’s also versatile, occasionally filling in at left-back. A key cog in Manchester City’s 2018-19 treble-winning side, there’s no doubt that Laporte is up there with the very best in the world right now. Just tell Didier Deschamps that now.

Could anybody else be on top of this list? Virgil Van Dijk is without a shadow of a doubt the best central defender on the planet right now. Blessed with supreme physical gifts, the Dutchman is a commanding and charismatic presence at the heart of Liverpool’s defence. He leads from the back, getting his head to every ball and rarely letting anybody past him.

In 2019, Van Dijk won UEFA’s Men’s Player of the Year award, after an extraordinary season with the Reds saw them win the Champion’s League. The signing of Van Dijk in January 2018 coincided with an extraordinary upturn in results. Liverpool’s previously shambolic defence was the best in Europe last term, thanks to the former Southampton and Celtic man. According to Troy Deeney he even smells good.