We know he’s not a player, but Payton is still an extremely high-profile name in the NFL. The New Orleans Saints head coach fell ill and stayed at home for two weeks in line with state guidelines. Unlike other people, he said his appetite didn’t dissipate during this time.

Payton spent a lot of his recovery on Twitter and watching Netflix. He’s now well again and ready to guide the Saints in their quest for Super Bowl glory. Furthermore, nobody is immune from this, as he wisely reminded the world by stating, “Even Prince Charles got it.”

Life is back to normal for Wood after he recovered from his positive test. The Detroit Piston was the first NBA star to get better after contracting the sickness. He’s fine now and ready to make a difference for the Pistons if the NBA agrees a ‘second bubble’ for non-playoff teams.

With the playoffs set to go down in Orlando, the other teams are at a loss. The NBA is currently considering an opportunity for the other teams, like the Pistons and Chicago Bulls, to play. In sum, it would be a good way for players like Wood to forget about their recent trauma.

Juventus defender Rugani says that he is now ‘fine’ after his recovery. The first soccer player in Italy to fall victim to the global health crisis, he is now healthy again. But it was definitely a difficult time for him because of all the uncertainties he struggled with.

As a result, the entire Juventus squad had to stay at home. His teammate, Argentina international Paolo Dybala also got sick and took a longer road to recovery. However, now both men are helping Juventus in their push for a ninth successive Serie A title.

An All-Star for the past three years, Blackmon is one of the best players in MLB today. However, that doesn’t make him immune from the global health crisis. He was the first known baseball player to contract the sickness. The Colorado Rockies outfielder showed symptoms at Coors Field in Denver.

He will make a full recovery but it just goes to show how athletes across the sporting spectrum are legitimately affected by this. In short, it doesn’t matter how fit or healthy you are because you can still catch it. Luckily, Blackmon is ready to make a comeback now.

Jordan is one of a trio of Brooklyn Nets stars, alongside teammates Kevin Durant and Spencer Dinwiddie, to get sick. He did everything he could to avoid it, even flying privately to New York. However, despite his best efforts, it still got him. He’s now out of the NBA’s restart.

Dinwiddie was having a career-year for the Brooklyn Nets, averaging 20.6 points per game. Both of these men will be missed when the Nets get back into action. In short, it’s far from an ideal situation for the franchise. But that’s just the hand they have.

The NHL has kept a tight lid on the names of players suffering from the illness. However, Auston Matthews confirmed he has it. The Toronto Maple Leafs star is currently unable to attend their training camp. Matthews is one of the most exciting players in the NHL today.

At least 10 other players have tested positive since the global health emergency began. Somehow, the NHL has managed to keep their identities under wraps. It is a strange decision because there is no shame in being sick. But this is the way they are approaching the situation.

Everything was running smoothly for the NBA until it suddenly wasn’t. First of all, they agreed to put the playoffs in Orlando. Then news broke that Malcolm Brogdon was sick. The Indiana Pacers’ star tested positive, jeopardizing the restart.

However, Brogdon explained that his symptoms were minor and that he was progressing well. Despite this, he was obviously still unable to attend practices. NBA commissioner Adam Silver explained that the league will just have to adapt to the new world order.

Brazilian UFC fighter Jacare is the most high-profile MMA fighter to contract the illness. Health officials discovered that he was positive, forcing him to withdraw from UFC 249. Obviously, MMA fighters have to get up very close and personal with their opponents so it’s not exactly conducive in a health crisis.

Souza’s opponent Uriah Hall sent him well wishes. Furthermore, the Brazilian wants to fight again very soon because he has bought a new house. But the UFC remained active throughout the emergency so it seems he will likely get his chance.

Mitchell’s relationship with Jazz teammate Rudy Gobert went ice-cold after the latter’s reckless behavior before he tested positive in March. It resulted in Mitchell becoming one of the first two players to catch the disease. However, since then matters have thawed between the two men.

For Mitchell, it was even more frustrating because he was asymptomatic. Despite feeling perfectly fine, he had to avoid close friends, family, and teammates until the medical staff cleared him. He’s now back to normal and able to concentrate on Orlando.

There was a lot of criticism towards Djokovic after he got sick and spread the illness at the Adria Tour in Belgrade. Djokovic is notorious for his anti-vaccination beliefs and didn’t take the necessary precautions even though he tested positive. First of all, he carried it over international lines in his system.

But then media pictured him embracing and high-fiving several other athletes at the event, which he organizes. These included several other professional tennis players, as well as NBA star Nikola Jokic. In short, it was a PR disaster for one of the best players on the planet.

The health emergency left Broncos’ defensive back Jackson afflicted. Unlike teammate Von Miller, who suffers from asthma, Jackson only displayed minor symptoms after he tested positive. Since then, he fully recovered but is at odds with the NFL’s plan to start the league up as normal.

Jackson says that the threat of spreading the sickness to their friends and families or just ordinary people is too great. He is not comfortable with the idea unless doctors prove it to be safe. In short, players who actually got sick have a very different opinion from executives who stayed healthy.

Playing for Juventus in Italy’s Serie A, Dybala is one of the brightest talents in world soccer. However, he also fell victim to the current crisis – not once, but four times. His sickness was impossible to shake as he tested positive four times in six weeks.

With a high number of deaths, Italy was ravaged but is slowly getting back to normal now. Finally, he recovered after the nightmare situation. He is now helping Juventus in their quest for a ninth Serie A title in a row. Dybala will want to forget all about his struggles during the unexpected offseason.

Serbia’s Jokic tested positive for the illness after embracing his countryman Novak Djokovic. He was back in his native country to attend a farewell exhibition game in Belgrade to honor Dejan Mikojevic, his head coach before moving to the Denver Nuggets.

However, getting sick was not in his plans. The problem is that it also disrupts the Nuggets’ preparations for the NBA return in Orlando. In short, Jokic can’t leave Belgrade until doctors clear him. To sum up, there is just no escape from this no matter where you are in the world.

Gobert made headlines for all of the wrong reasons after his laid-back approach to the health crisis. He infamously responded to NBA regulations by touching all of the microphones at a press conference. Then he high-fived many of his teammates. Guess who got sick?

That’s right: Gobert and several of his Jazz teammates tested positive. In short, there was tension in the locker room. He carelessly exposed his team so they were not happy. Since then, Gobert has apologized. The incident also left him feeling embarrassed as he should have been.

Los Angeles Ram center Allen was the team’s starting center last season. He’ll also expect to make that position his own again this year. However, that will depend on his recovery after he recently fell ill. Allen was the first NFL star to come publicly come out that he had the crippling sickness.

Drafted out of Michigan State in 2018, he played on special teams during his rookie season. He realized that he wasn’t healthy while working out at the Rams’ training center. Allen told FOX Sports that he lost his sense of smell and taste, and they haven’t returned even after his other symptoms abated.

Spanish World Cup winner Reina is a popular personality. He has played for Liverpool, Bayern Munich, and Napoli in a stellar career. He is currently with Aston Villa, as they battle for Premier League survival. He also tested positive and suffered from the debilitating illness.

Reina explained in-depth that he couldn’t breathe during the sickness. Furthermore, he revealed his ‘endless fear’ after he went without oxygen for 25 minutes. Luckily, Reina’s recovery is complete, but there is no doubt his experience was traumatic and terrifying.

The Denver Broncos pass rusher detailed a terrifying personal experience when he tested positive. First of all, his lung constricted so that he couldn’t breathe properly. Then he used his asthma nebulizer to try and bring it back to normal. But even that didn’t totally help him. 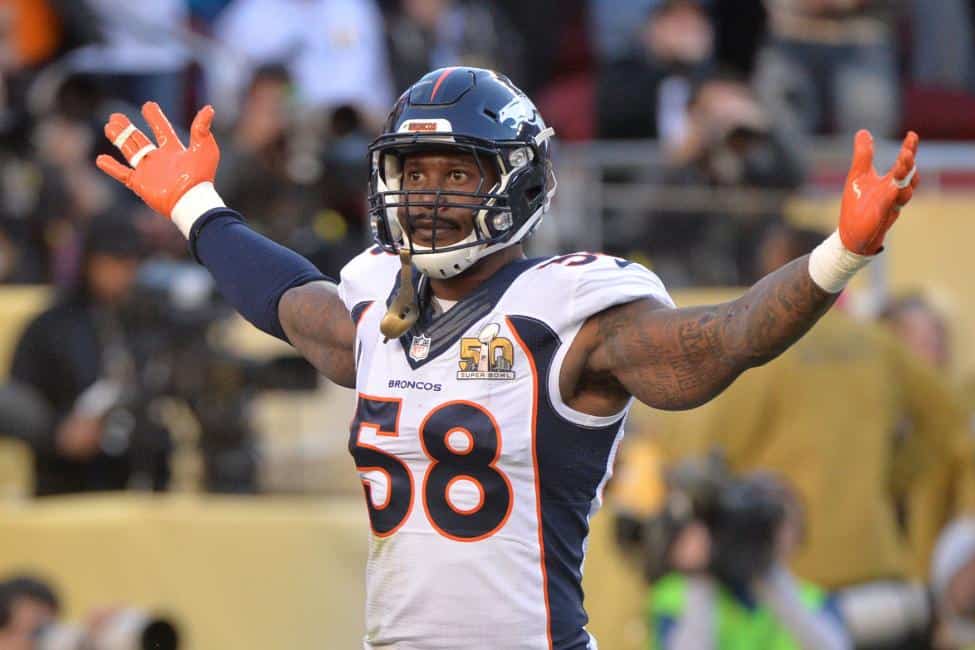 Miller explained that it was scary to go to sleep knowing that his breathing could get worse throughout the night. Furthermore, he couldn’t taste his food and had a reduced appetite, which also affected his diet. Finally, after 17 days, he was able to get back to normal.

Dallas Cowboys running back Elliot feels normal after his recovery. His symptoms were not as serious as those of other victims. However, he did have shortness of breath and a cough for a few days. After 10 days he was back to feeling relatively normal.

Elliot does have concerns about player safety because he feels the NFL is not taking the disease seriously enough. The three-time Pro Bowler says that it goes deeper than just the athletes because many of their families are vulnerable. Furthermore, so are many coaches. It’s a complicated situation.

By far the most famous basketball player to get sick, Durant has also recovered. The Brooklyn Nets star was one of three players on the team who tested positive for the illness. First of all, Durant couldn’t believe it because he didn’t have any of the symptoms.

Then it was a matter of trying to get as fit and healthy as possible. In short, he believes that we all have to do our bit to ensure that society remains safe. But he doesn’t need to worry about infecting other players because he won’t play again this season anyway due to a serious Achilles injury.