Timberwolves Towns and De’Angelo Russell are central to Minnesota and their hopes of improving in the future. Still just 24, he’s one of the best players in the NBA, nevermind those just future stars under 25. In short, his career stat line is an impressive 22.7 points, 11.8 rebounds, and 2.8 assists per game.

One of the best offensive centers in the league, he has continued to improve over his five seasons in Minnesota. Furthermore, he helps bring the best out of Russell. The Timberwolves must get the two of them on the court at the same time or it will be difficult to find any success.

The hiatus was better for some teams than for others, and one of the main beneficiaries were the Philadelphia 76ers. The return of Simmons could be essential to their hopes of navigating a tough Eastern Conference. With both stars Simmons and Joel Embiid on the court, they’re in a different world than they were only a few months ago.

But now it’s all about making the best use of these players while they’re available. The 76ers are producing only a plus-0.9 net rating when both are on the court. Furthermore, Simmons averaged just 13.9 points and six assists last postseason. These numbers need to go up if they want to go far in Orlando.

Bafflingly nimble for his size, Sabonis is a key man for the Pacers this year. A 6-foot-11, 240-pound center with passing vision akin to a point guard, he’s an anomaly in the sport. He’s just so effective and consistent in a team rife with injuries.

The Pacers have missed key stars this year including Victor Oladipo and now Jeremy Lamb. Indiana will slowly reintroduce the former, but it’s up to Sabonis to maintain the solidity of this team. Don’t underrate his playmaking ability as he averages five assists per game.

Between stars Porzingis and Doncic, the Mavericks look like a very exciting side. In short, the Eastern European influence is definitely having a positive influence on their attack. Porzingis just scrapes onto this list because he turns 25 a couple of days after the return. 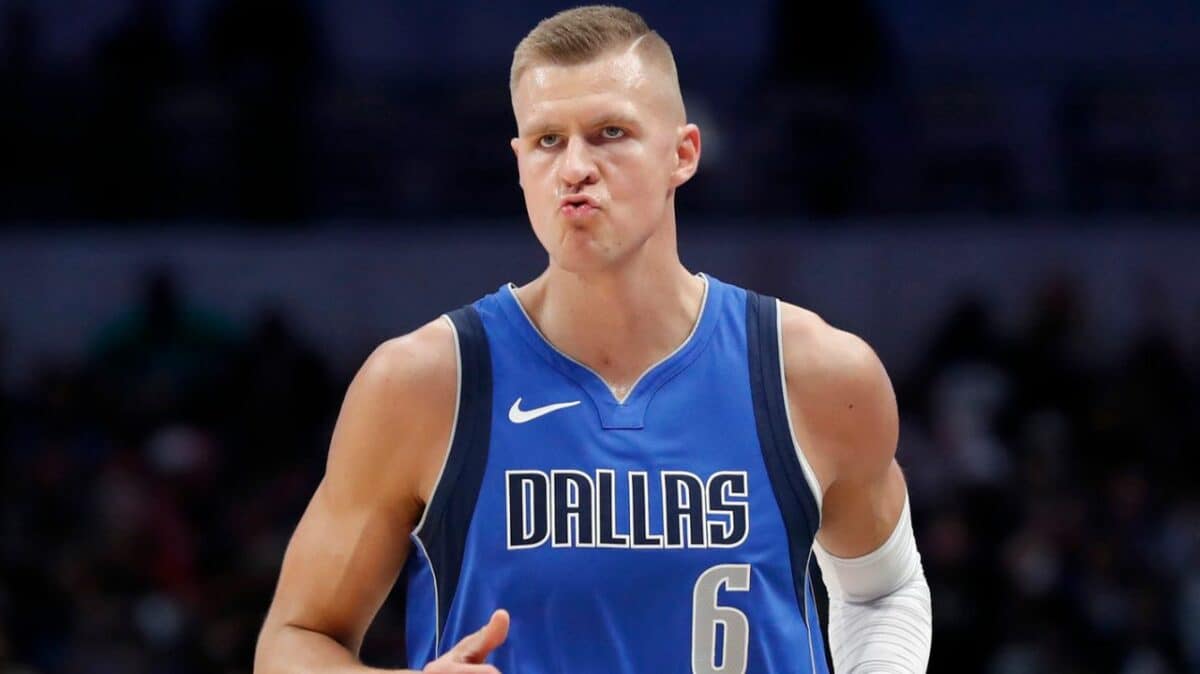 Furthermore, he will hope to hit the ground running after a disjointed year. He was just starting to get into full swing when the health crisis landed. In his last 15 games before the hiatus, Porzingis averaged 25.2 points, 10.9 rebounds, and 2.3 blocks per game.

Jayson Tatum gets all the headlines in this exciting young Celtics side, but Brown deserves some respect of his own. A leader on and off the court, Brown used his fame during the recent unrest in America to try and do some good. However, he’s also brilliant on the court.

He has had something of a breakout season and his scoring average has improved by over seven points this year. Furthermore, Brown was great in the 2017-18 playoffs so he’ll look to carry that momentum forward. Slightly underrated, he and other stars could help the Celtics to another championship ring.

Devin Booker is the Suns’ star but Ayton is another redeeming factor. Phoenix has almost no chance of making it to the postseason, but the bright side is that their young stars are raring to go. The NBA suspended Ayton for 25 games from the start of the season but he has been excellent since January.

Ayton was a massive loss for the Suns because he’s a superb foil for Booker. He isn’t quite at the same level as his teammate but he’s definitely improving in leaps and bounds. In short, it’s all about improving the on-court chemistry between Ayton and Booker before next season.

Mitchell’s tense off-court relationship with Rudy Gobert makes more headlines these days than his ability on the court, but that’s not fair. He is a player who can make a real difference. Bogdan Bogdanovic’s injury means the Jazz will be short on stars and will rely on him more than ever.

However, he’s no stranger to shouldering the load. In short, he offers real leadership qualities, which is something that truly need. In 219 games with the Jazz, the high-flyer has put up 22.7 points and led the Utah franchise to the postseason each year he’s been with the club.

In just his third season, Tatum looks like a superstar. The 22-year-old is definitely the biggest star on the Celtics’ roster at the moment. But that’s all the more impressive when you think about the fact that Kemba Walker and Jaylen Brown are both stars on the storied team. In sum, he has no weaknesses.

Tatum was in top form before the season paused as one of the top young stars in the NBA. He was averaging 28.2 points and 7.5 rebounds on 46 percent 3-point shooting over his last 20 games. In short, Tatum has the potential to be a generational talent and a potential NBA heir to the likes of LeBron James and Kevin Durant.

The Heat have a lot to play for before the end of the season. They could still overtake the Celtics for the number three playoff seed. In short, they have a deep roster so they could go far into the postseason. Adebayo will be one of several players looking to make a difference.

Outside of stars like Jimmy Butler, Adebayo is the Celtics’ most important player this season. He’s an All-Star and will look to carry that form into the playoffs. The question is how will he perform in his first real postseason? This has been a breakout year for the 23-year-old.

It’s easy to forget now, but Zion Williamson wasn’t the Pelican’s main man all season. Before January, the weight of the team was on Ingram’s shoulders. The All-Star has flourished under the spotlight and it will be very exciting to see what both young stars can achieve together in a full season. Together they can make a difference.

The Pelicans have a net rating of plus-12.4 with Ingram and Williamson on the court together in 341 minutes this season. Meanwhile, Ingram has developed as an individual, as his three-point shooting percentages have gone up. New Orleans has gained massively from his recovery from a blood disease.

Somewhat underrated, Fox definitely helped the Kings in their recent renaissance before the hiatus started. The addition of other younger players means Fox flies under the radar, but make no mistake, he definitely makes a difference in how Sacramento plays.

The Kings won seven of their last 10 games and 13 of their last 20 before the break. Fox has been superb since January, contributing 22.3 points, 6.8 assists, and 4.1 rebounds since the New Year. If they can keep him in good form, then they may finally end their nightmare postseason drought.

Nikola Jokic is the Denver Nuggets’ main man. But he’s also notorious for ballooning up out of control. Who knows what condition the Serbian will be in when the league finally returns? However, the Nuggets have been here before and that’s where Murray enters the frame.

He was the main conduit for everything good about their most recent postseason. In playoff wins, he averaged 24.1 points on 50 percent shooting. These numbers dropped to 18.4 points on 36 percent shooting in defeats. To sum up, they’ll need him to be in top form because he can make a massive difference.

A player who is still growing physically and mentally, Jackson Jr. is a star of the future. Ja Morant gets the plaudits but Jackson is even younger than his teammate. The Grizzlies will benefit because he was out with injury. Now he’ll hope to make a difference in the pursuit of the eighth seed.

JJJ has increased his scoring average this season and more than doubled his three-point attempts per game. Meanwhile, his accuracy has improved to 40 percent, a number that is up there with the best. A strong shot-blocker, he is still developing defensively.

Doncic is a genuine superstar. The Mavericks rely on this 21-year-old so much that any hope of being a contender falls on his shoulders. His emergence and development this season has been nothing short of amazing, yet he’ll have to settle quickly if they hope to make it far in Orlando.

A strong performance in the eight seed games could see them make it as high as the fifth seed. This would see them avoid the LA Clippers which would give them a far greater chance of contention. Only the big power forwards and center have a higher shooting accuracy than Doncic this season.

At the relatively tender age of 23, Booker has become the Suns’ equivalent of Luke Skywalker. He might not be taking on Darth Vadar anytime soon but their hopes definitely lie on his shoulders. Those hopes are slim because they have very little chance of seizing the nine spot, nevermind the number eight.

However, they have the opportunity to enhance his reputation and his worth by going out with a bit of dignity. Booker is also one of the deadliest shooters in the league this season. His playmaking and three-point shooting have improved a lot. The Suns may be awful but Booker is brilliant.

The Murray State star almost tops this list. Morant will probably win the Rookie of the Year Award so it’s all good. The 20-year-old has been a revelation for the Grizzlies who rely on him just as much as the Pelicans rely on Zion Williamson. He also plays in one of the toughest positions on the court, making his consistency all the more impressive.

The Grizzlies are under pressure from the Pelicans this season for that number eight seeding, but Morant will be central to their hopes of winning in Orlando. But Morant has also been one of the best crunch-time players in the NBA, averaging 3.3 points in clutch situations. In short, he makes a massive difference and will be one of the top young stars in the NBA for several years to come.

Could anybody else top this list? The hype behind Williamson was incredible before he even made his NBA debut. But since then he’s been excellent and could even force the Pelicans into the playoffs. Since January, the Pelicans went 10-7 in games in which Williamson played 25 or more minutes.

They also have an unbelievable plus-13.9 net rating with him on the court. It’s no surprise that many are picking the Pelicans to beat the Grizzlies for the No. 8 seed in the West because Williamson makes such a large difference. Not every number one draft pick lives up to his billing, but he is so far. That’s just the tip of the iceberg. Williamson could legitimately take the torch from Lebron James as the biggest star in all of basketball for years to come.