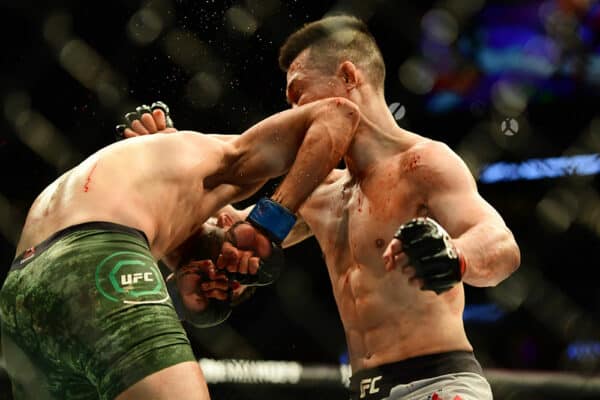 Knockouts are the most exciting part of MMA. At the end of the day, everybody watches combat sports for a reason and that’s because they want to be entertained. Knockouts are the pinnacle of performance in fighting and we often see the best ones in the UFC.

It’s also good for business. There is nothing UFC President Dana White loves more than seeing a fight finish in brutal style. We’ve seen everything from one-punch knockouts to spinning back kicks and flying knees. There have been so many great finishes that it’s a fool’s errand to make an all-time list. So let’s take a look at 25 of the best knockouts since 2015. Check out the list below via TalkSport.

One of the most satisfying knockouts on this list if not the most spectacular. Bisping agreed to fight for the middleweight title on just two weeks’ notice. He went into this fight against the heavily-favored Luke Rockhold as a major underdog. After missing out on the benefits of a full fight camp, nobody gave the British MMA pioneer a shot.

Watch @Bisping vs. Rockhold at #UFC199 on @UFCFightPass pic.twitter.com/NGdEQ1kqwk

But ‘The Count’ proved everybody wrong when he smashed Rockhold unconscious in the first round. He put together a slick sequence to win the championship. The American champion was arrogant, holding his chin high and his guard low. Bisping made him pay and stunned the world in the process. This was one of the most shocking upsets in UFC history.